I wanted to get a manicure and pedicure before my LA conference in August, so I called a place my friend, Jan, suggested.  I made an appointment and a couple of weeks later, I went for my mani/pedi (see how quickly I picked up the lingo?).


When I walked in, they asked if I was the Living Social client.  I said, no I wasn't but I could be if they wanted me to - they didn't.  During my pedicure, Jen (the woman doing my nails) tried to think of how this mistake could have been made.  I suggested the receptionist wrote it on the wrong day.  They checked - nope.  Someone had another idea - nope . . . and another - no again.  It was really bothering them.


After my pedicure, while Jen was doing my manicure, she said, "It's so strange - the four-digit Living Social number is right next to your name."  Then it hit me - I knew exactly what happened!  When I had called to make my appointment, I thought the receptionist asked for the last four digits of my social security number - apparently she asked for my 4-digit Living Social number.  I thought, "Wow, they are really cautious!"  and, even though I thought it was odd, I gave it to her.  I explained this to Jen and told her the last four digits of my SS number; she checked the book and, sure enough, they were the same - mystery solved! MORON! 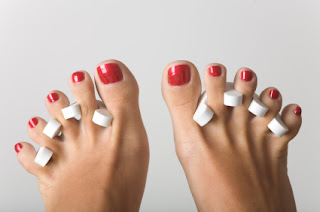