Today's headache-inducing word, QUANTUM, was given to me by my writer friend, Jill Proctor.  Anyone who know me well, knows that anything having to do with time and space makes my eyeballs spin!  I just don't have a brain for it.  So, instead of trying to use the word in any meaningful way (which would mean I'd have to understand it), I wrote about how I feel about such words.  It's short and sweet and I don't think it'll make anyone's head spin (maybe the glossary will). 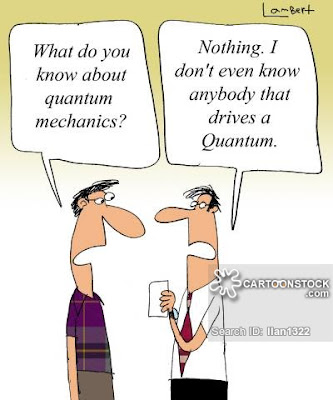 The words that deal with time and space
just put a scowl upon my face!

Glossary
(read them at your own risk!)

Quark – Any of a set of six hypothetical elementary particles together with their antiparticles thought to be fundamental units of all baryons and mesons but unable to exist in isolation.

Quantum – The smallest quantity of radiant energy, equal to Planck's constant times the frequency of the associated radiation.

Obliquity – The angle between the plane of the earth's orbit and that of the celestial equator, equal to approximately 23°  27′ at present.

Damacloid – A group of unusual asteroids that are inactive nuclei of Halley’s Comet and other long-period comets, and have been found to have a retrograde orbit, unlike other types of asteroids.

Posted by Lori Degman at 3:33 PM No comments: