There's an amazing young man named Erik, who is totally immersed in the kidlit community.   He has a blog called This Kid Reviews Books, where he - you guessed it - reviews books!  In addition to that, he guest posts on other blogs, is a regular commenter and participates in writing contests (and sometimes wins)!  You can learn more about Erik and read his book reviews on his blog!

Anyway, Erik gave me the word for today - Katzenjammer!  He gave me the definition: "A feeling of uneasiness, worry or nervousness".  I looked in the dictionary and found another definition: "uproar; clamor", and decided to use that instead.  So, here's the poem I wrote using Katzenjammer.  Thanks for the great suggestion, Erik! 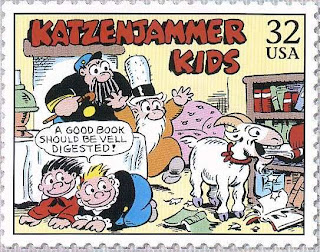 
“Order!  Order!” the judge banged his hammer
to quiet the chaos - a real katzenjammer!

The verdict was in.  They had set the girl free.
The crowd moaned and groaned,  “Tell us, how could that be?”

“She slept in their beds without having permission.”
“She fled from the house - it’s as good as admission!”

“The jury was wrong!”  “ They have heads filled with rocks!”
“The verdict’s just right!” said the girl with gold locks.