Today's word, PARADOX, was given to me by my Facebook friend, Donna Rossman.  I researched some paradoxes and found one about a crocodile that I thought would be fun to write about.  I've explained it below the poem.  I took a little creative liberty - I hope I've done it justice! 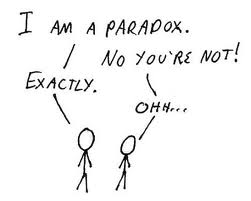 I offer you this paradox
It's all about this pair of crocs . . .

While one day walking in the wild,
two crocs snatched up a little child.

The first croc said, “We’ve got your daughter;
grabbed her up, from in the water.”

“Give her back!” her father called.
“My baby girl!” her mother bawled.

“So, here’s the deal, now listen well.
We’ll give her back if you can tell

the plan we have in mind for her.
Now, go ahead, discuss – confer.

And if you guess our plan correctly,
We swear to follow through, directly.

Well, there you have it – think it through.
Just what’s a croc supposed to do?

The Crocodile Paradox is such an ancient and enduring logic problem that in the Middle Ages the word "crocodilite" came to be used to refer to any similarly brain-twisting dilemma where you admit something that is later used against you, while "crocodility" is an equally ancient word for captious or fallacious reasoning

Connect with me on Twitter and Facebook.  Plus, sign up for free
email updates from this blog (in the upper right hand side of the page).
Posted by Lori Degman at 7:13 PM No comments: