Ok, when you're given the word, Nihilist (thanks a lot, Linda), it's really hard to be funny - so, I got a little deep on this one! I'm a non-religious person and always thought of myself as non-spiritual, until I started researching nihilists to write this poem. Now I think, compared to a nihilist, I'm Mother Theresa!! 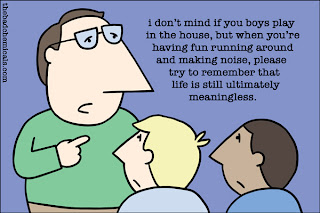 Nihilist
Henry was a nihilist
who longed to make a change.
And so he hired a stylist,
which seemed a little strange.

He got a re-do, “Oprah style”,
from shoes up to his hair.
But still, behind his brand new smile,
poor Henry didn’t care.

The stylist took a different tack
and worked on Henry’s mind.
He filled his head with lots of facts.
Still, Henry was unkind.

Then, just before he called it quits
he thought of something smart:
to pull up Henry from the pits,
he’d have to reach his heart!

The stylist taught him how to “see”;
to redefine his scope.
And that’s how Henry came to be
a man with new-found hope

Connect with me on Twitter and Facebook.  Plus, sign up for free
email updates from this blog (in the upper right hand side of the page).
Posted by Lori Degman at 4:30 PM No comments: