I went to the SCBWI Conference in LA and it was fantastic, stupendous, outstanding, tremendous . . . !

There were also a zillion workshops throughout the four days.  I'd go into detail, but why reinvent the wheel?  There was a team of bloggers who covered the sessions.  You can read it here: The official SCBWI Conference Blog.

I met so many talented and fun people, many of whom I'd talked to online but never in person.   I had two roommates I'd found online - E. Samantha Cheng, a mini-documentary producer and Shelby Mahan, a middle-grade nonfiction writer.  I was worried that we might not hit it off and it would be uncomfortable for us.  Well, there was no need to worry - we had the greatest time together!   As a matter of fact, we've vowed to be roommates for all future conferences! 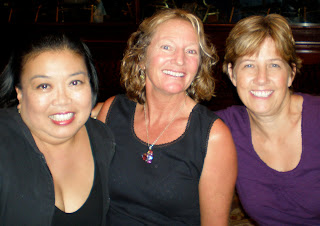 I also met my agent, Jamie Weiss Chilton, for the first time in person!  On Saturday night, she and her fellow agent, Kelly Sonnack, hosted a little wine and cheese gathering in the park for their clients.  It was so nice meeting them all.  On Sunday morning, she took me out to breakfast at a really cool restaurant - can't remember the name of it though.  It was nice getting to know her better. 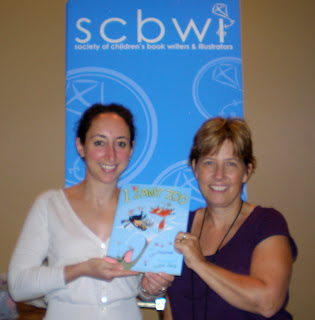 I hope I'll be able to attend next year - it'll be their 40th year so it's bound to be loads of fun!  If I do go, I'll know better than to lug 20 books with me.  At Friday night's book sale, I only sold five books - and three of them were bought by my roommates!  Obviously, this picture was taken before I counted how many books were left! 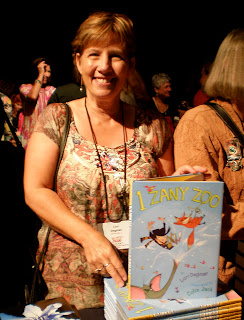 Anyone out there have a good conference you'd recommend?
Posted by Lori Degman at 5:58 PM